#11 What I Learned This Semester 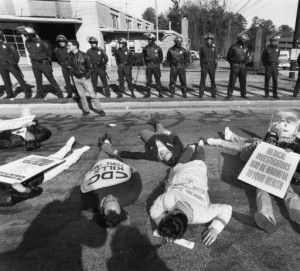 My primary source picture of a ‘die-in’ protesting the CDC’s handling of the AIDS crisis while police stood in front of the Centers for Disease Control, really showed me what AIDS in Atlanta really consisted of in the 1990’s. This picture showed me how bad it really was that AIDS was not being attended to. The statistics of so many people dying were incredible. The protests that took place were documented in pictures like my primary source and without them people like me would not really know the tragedy that ACT UP and other supporters when through. That as well as how hard those supporters worked nonviolently to get the CDC to change.

From my research in this course I have learned how important it is to raise awareness on AIDS and HIV. I didn’t really know what AIDS was at all, all I really thought was that it was sexually transmitted through gays but it is so much more. It can be genetically transferred and that blows my mind. Now I know so much that I could tell anyone anything they needed to know. I didn’t realize how much this infection effected not only the nation but Atlanta. It was such a large ordeal and there were so many protests here. I really didn’t know that all of this history belonged to this city.

The research I have done for this subject has made me see how multi-modal protesting can make an impact. I’ve seen videos, pictures, speeches, documented research, etc.; all on this movement that not too many people know about unless they lived through it.

AIDS in Atlanta is still a very serious and very current problem. Atlanta is the fifth highest metro area for rates of new HIV diagnoses, according to the Centers for Disease Control and Prevention. According to the CDC, the South has the greatest number of people living with the disease and dying from it, and that in Georgia, 613 people died with AIDS in 2012. These numbers are real. Just like this image, we as people of the United States should spread the word of this infection and tell other people to; Get educated, get tested, and get results. Although this picture was taken in 1990, AIDS and HIV are still very prevalent today.